Braille me by your name? 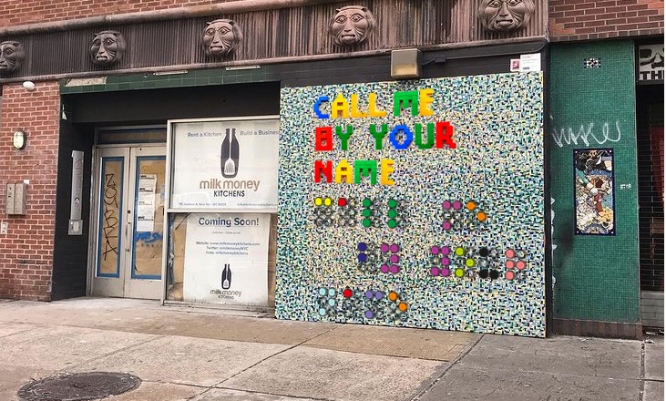 To mark the 50th anniversary of WorldPride and the Stonewall riots, 50 murals were painted on the walls of New York’s Lower East Side in June 2019. Local and international artists were selected to create murals across New York City’s five boroughs that reflect and celebrate the beauty, struggles and actions of the LGBT community.

The public art includes a unique Lego creation by Brooklyn artist Jaye Moon. It’s actually a Braille scene from the film Call Me by Your Name, made in celebration of the WorldPride Festival:

“As this festival was a celebration of the LGBT community, I decided to use the film Call Me by Your Name to create a wall art piece.

I translated the film’s script into English Braille and built the translation visually using Lego pieces. I edited the film’s script to fit the site-specific space while maintaining the flow of the story. I wanted to draw attention to a language that is often overlooked by people who are not visually impaired.

Using Braille for the script connects several communities in a public space, making the work more intersectional. Viewers may be attracted to the colours of the work and the novelty of the games, but what they actually find in the code are lives that have been historically hidden. The building blocks connect these experiences visually and literally.”

Jaye Moon is a Korean artist based in New York. She came to the United States in 1990 and graduated in 1994 from the Pratt Institute of Sculpture in New York. He mostly creates urban art with political themes, combining Lego blocks with real architectural structures.

His series of typographic works placed around the city read with captions such as “Paradise Here” and “Somewhere Better than this Place”, expressing the artist’s interest in a new, portable and immediate way of living in the city. By using LEGOs as a primary medium, the audience is able to interact with Jaye Moon’s work by deconstructing or reconfiguring the mosaic as bricks – turning them into communal objects in the urban landscape that can be easily picked up, dismantled or rebuilt.