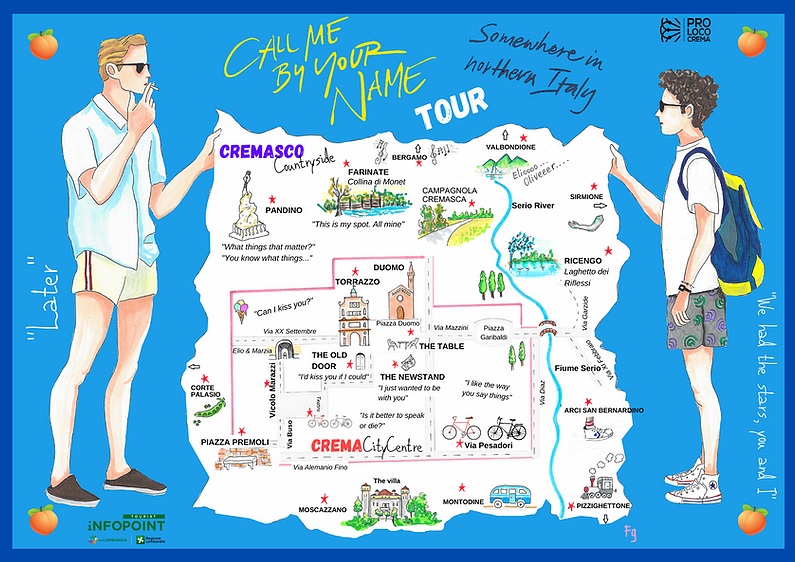 A tour of the filming locations in Lombardy, northern Italy. In addition to the natural beauty of the region, its centuries-old architectural heritage attracts tourists and, since autumn 2017, it has become a destination and pilgrimage destination for fans of the hit movie Call Me by Your Name.

Nothing proves that a film has become a cult film more than the number of tourists who visit the filming locations. Although the novel on which the film is based is set on the Italian Riviera in Liguria, director Luca Guadagnino has moved the story from the coast to the Lombardy location where he himself lives.

The filming locations are precisely identifiable, perhaps even the exact cobblestones on which the two young actors were standing in a particular scene. Tourists search for the safe position using photos copied from the film frames.

The Villa Albergoni, where most of the film takes place, is located in Moscazzano. When the guys hop on their bikes and cycle to the city centre, they are actually walking through the streets of the neighbouring town of Crema, because the old town there provided a much more beautiful backdrop for the film. The Professor takes Elio and Oliver to Sirmione, on the shores of Lake Garda, when they come across an art treasure. At the end of the film, the boys travel to Bergamo to say goodbye to each other on a trip to the city and the surrounding mountains.

Filming locations with their corresponding scenes: